I had heard a lot of good things about this event (a multi-venue autotest) run by Maidstone and Mid-Kent MC. Once it became part of Ian Mepham’s Stag-Do weekend an entry was duly dispatched.

In the lead up to the event I did wonder what it would all be about, the few videos I had seen showed some tight looking tests on tarmac but very little other detail or info. So I ensured the handbrake was as tight as it could be and with plenty of air in the rear tyres, some ‘testing’ in the local lanes proved it should just about work well enough. 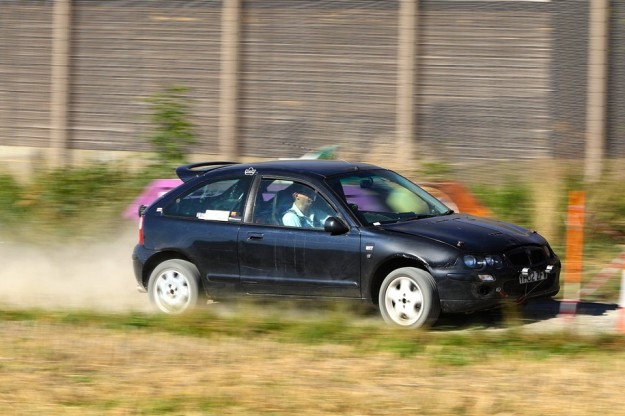 The event was split into two groups with all of us ‘stags’ in one group there was a great social side to the event, sharing tales of how the tests went throughout the day.

The first test we went to is known as the ‘prison test’ as it literally runs down the perimeter fence of a prison! This gravel track was great fun, though it did mean the car floor took a hammering… With this out of the way it was on to the tougher tarmac tests. There is no time to walk or practice the tests, you arrive have a quick look and then get on with it, with no navigator either. The tests although they looked on paper complicated, were in truth all very flowing and  easy enough to remember. Throughout the whole event I only got one wrong test, and this was on my second run and was down to brain fade rather than anything else.

The day was rather full on, with lots of driving between venues, and by the end of the day I was rather knackered. At the finish we had no real idea of how we were doing during the day as the results are all collated at the end of the event. So apart from a bit of comparing times with each other ,we all had no idea of the results. In the lead up to the event I suspected the nature of the event, and the lack of lock on the ZR would result in a poor result. However I was very pleased to finish up 5th overall and 2nd in class, just 10 seconds off the overall win. It was also very pleasing when reviewing the results to see I had taken two fastest test times during the day and was generally within the top 5 all day. Definitely an event to do again!

It was back to Wetherfield but this time with the Micra for a stage rally. This would be the first stage rally of the year, and my first time driving the Micra on tarmac since the end of last year.

The entries in our class (A) was very strong with a number of high powered 1400 cars so we were in for a battle in our road rally spec car. The weather was glorious sunshine all day, although this did make it rather hot both in the car and for the tyres. The stage were all about 10 miles long, and made use of most of the airfield. This gave a great mix of twisty stuff in the bomb dump and really high speed flowing stuff. The twisty stuff really suited the Micra, and although we lacked ultimate power the flowing nature of the high speed parts meant it was a real challenge to keep the momentum and carry speed through the high speed parts. It was a great challenge dealing with the back end of the car stepping out round a corner when you are flat in 5th!

During the morning we built up our nice lead for our position of 4th in class, however a change of front tyres was required and the next set where nowhere near as good as the previous ones. So over the lunch break I went with a split tyre strategy to try and give better grip and confidence in high speed turn in. We went into stage 5 really needing to make back some time, as we couldn’t afford to lose as much time as we had in stage 4. We had a full-on charge in stage 5 with nothing left to give anywhere. Thankfully this worked and we started to increase the time between between us and 5th in class (another Micra). You can see on this stage below we were just a few seconds of the pace of a C2R2 Max, equal with a Fiesta R200 and faster than many other cars like M3’s and an Impreza! 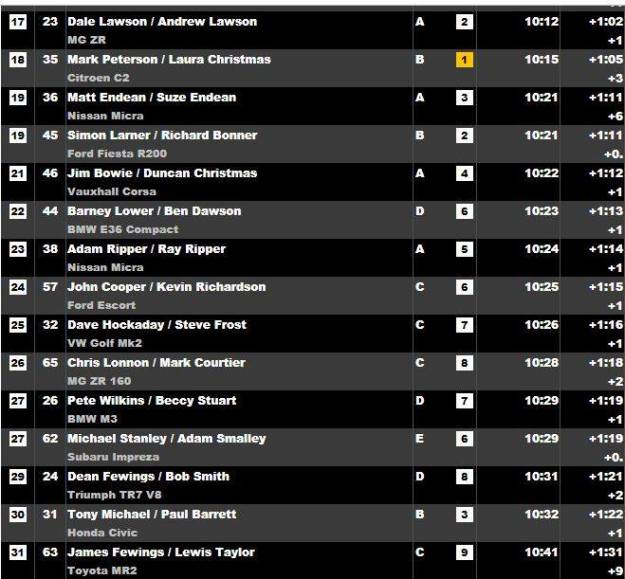 By the end of the day we finished up 4th in class (as best as we could have expected really) and 23rd overall. Our overall position shows us much higher than many other more high powered cars, which is pleasing and shows just how competitive the 1400 class is.

It was back to Debden for another targa rally. This timed I teamed up with David Lobb navving for him in his Focus ST170 and him navving for me in the ZR.

The organisers had found access to new parts of the airfield and had altered some of the more traditional tests, this was pleasing as the previous events had used the same tests for quite a while.

Luckily for me I got to drive second, though this does of course put the pressure on for me navving. Luckily we got round all ok with me navving. Going as a second drive does give an advantage as you get to see where you are going. By the end of the first test of tests, I was leading. However I suspected this would change during the day as the second driver advantage is reduced and others would get faster.

The day went by quickly with well designed tests flowing nicely and only short delays to the start of the tests. These short delays actually made the day more social as it gave a chance to chat to the other crews seeded around us.

By the end of the day I didn’t drop down the order as far as I thought I might, and I finished up 3rd overall and 2nd in class. It was pleasing when checking the results to see I had set 3 fastest test times, and many top 5 test times.

This would be the first time this year I had been able to get along to one of the Autosolo’s at Bovingdon. Being so local I like to do these events as they are great fun and are less than 30mins from home, and you are done by lunchtime so they don’t take over the weekend.

Overall I had a good run, though some rain compromised a couple of runs and a spin on one test did cost me a bit of time. Still it was a good fun event and a chance to get out in the ZR once again.

After a busy few weeks, it is time to catch up on a number of events.

The first of which was a hot days rallying at Debden at the WAC Targa Rally, nothing much to write home about results wise finishing just outside the top ten. Though looking back through the results it was pleasing to see a number of top 3 times.

Next up was a change in plans, we had originally planned to do Loton Park but our entries were rejected due to them being oversubcribed, which given we entered in February was surprising…. So we found another hillclimb to do on the same day. This time at Gurston Down. This was only our second hillclimb, these events require very precise driving as well as pushing hard. We used the MGZR and once the venue had dried out the list 1B tyres were the right call. The hill maybe short but it is very intense. By the end of the event, I finished up 5th in class, which given many competitors in our class are there many times a year was pleasing. 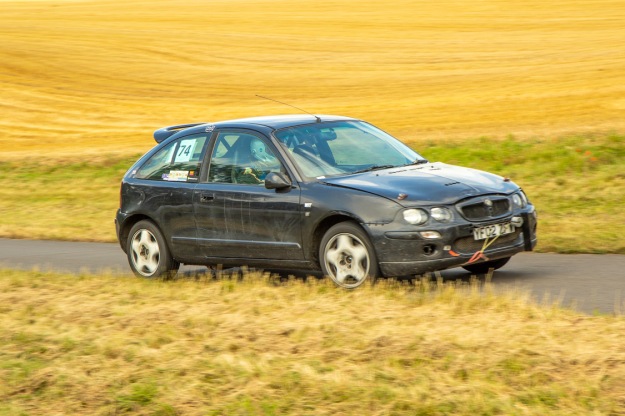 Next up was two grass autotests just days apart the first was a long and very hot drive to Brands Hatch on the hottest day in the UK ever. The tests were quite short, but after sorting some fuel vapourising issues it was straight into doing the tests. The tests were good fun, and just after we all finished the heaviest thunderstorm came in. Once results were in and we had dodged the rain, I had finished 3rd overall and 1st in class. This was pleasing after a year away from doing any autotests.

Then just a few days later it was on to Oxford MC’s annual grass autotest and BBQ. The tests on this event are a good length and a good challenge. In between the burgers the tests went well and I ended up 4th overall and 1st in class.

It was back to another Bath MC event this year. This time it was a new event for the club, and a new venue. Based at Long Newnton airfield it was an ideal base for a AutoX (think of a sprint around a grass track, over 3 or 4 laps). 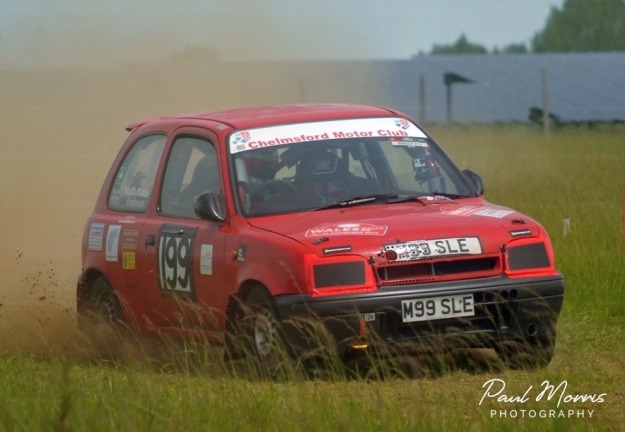 The Micra was entered in the road rally class, where we had competition from the Watts family in their road rally MGZR.

The first day was very hot (in fact the hottest day of the year). After the practice runs the grass had soon gone and it was down to a hard well packed surface. We had three timed runs each day and the fastest time from each day counted. As the first day progressed I got faster on each run. Like in sprinting AutoX is good for making you think about what lines to take and how to make back small amounts of time. By the end of Saturday I had a small 0.6 second lead in the class.

Sunday came and the hot weather had gone, and the clouds looked threatening, the forecast was clear, rain was on its way. So we all knew the first runs would be very important. I worked hard on ensuring my first run was both fast, smooth and still enough in reserve that I didn’t spin out or go four wheels off. Chances could be taken later on if needed. By the end of the first runs I had again another 0.6 second lead in the class.

However by now the rain had started and at first it didn’t really make much of a difference but by the time I lined up to start my second timed run it had rained for quite a while and by the second corner I knew I wouldn’t be improving my times. Thankfully it was slippery enough that no-one else could improve either. So I did two final runs in the mud which was very slippery and good fun though very slow.

Thankfully my banker first run on Sunday morning was enough to hold on to the class win, which I took by 1.2 seconds in the end, and finished 13th overall out of 52 starters.

All in all a great weekends motorsport, though cleaning off all the mud took many many hours! 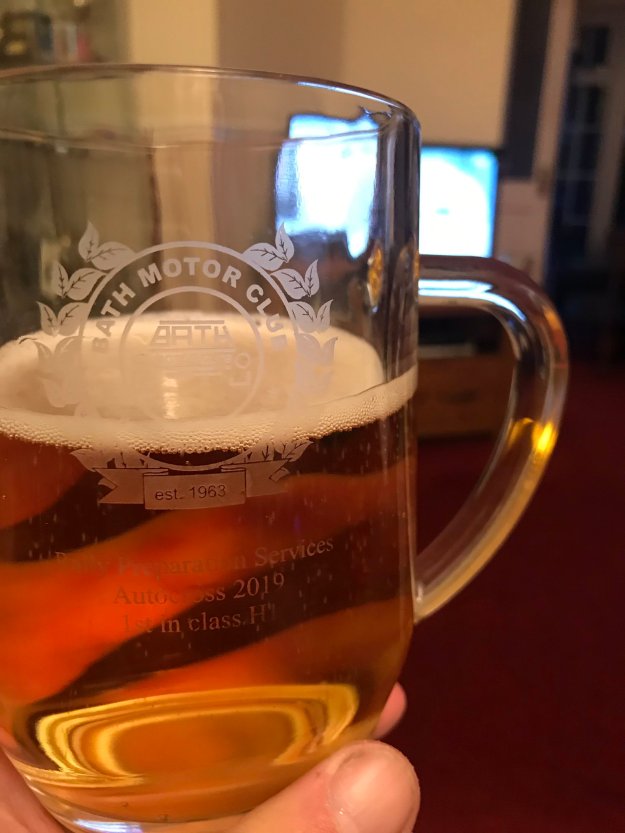 Nothing much to post, but once again I was giving demo Autosolo rides at Silverstone as part of the World RX. Here are some video of my demo rides some on-board, which gave me a chance to test out my new Go Pro start/stop lead. Plus some rare external videos. 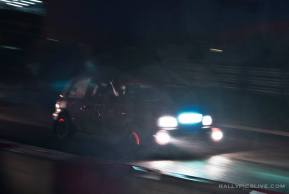 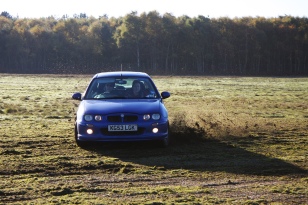 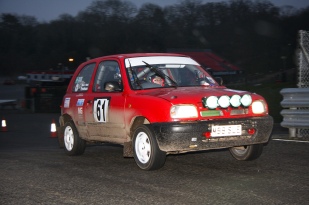 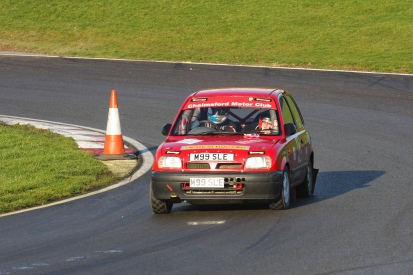